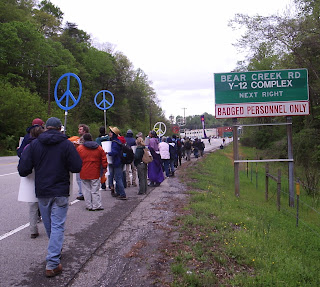 Soldiers in camouflage uniform were dispatched  from the federal side of the barbed-wire fence after the April 16, 2011  rally at the gates of the Y-12 bomb plant in Oak Ridge, Tennessee. Their mission?  To untie the hundreds of paper peace cranes fluttering along the length of the perimeter fence.

We who marched to the gates of this hellish place through the streets of Tennessee's "secret city," came from throughout the Southeast and as far as Michigan. We were perhaps outnumbered  by the armed security forces on alert behind the barbed wire. Numerous high powered cameras recorded our arrival, no doubt zooming in to capture close-ups of the gathered resistance to the crime and to President Obama's $6.5 billion allotted to pay for more nuclear weapons production at Oak Ridge.

The W-76 and W-76-1 thermonuclear secondaries produced at Y-12 are designed and produced to unleash 100 KT of uncontrollable and indiscriminate heat, blast and radiation, six times more than the Hiroshima bomb, according to a 2009 report in the  Bulletin of Atomic Scientists.

As we approached the gates, with Japanese Buddhist drumming and chanting, an officer with the bomb plant security detail issued his gruff order:   "You have five seconds to vacate the road or you will be arrested."  We all complied. There were to be no arrests this time. This was a contrast with the July 2010 civil resistance there where 37 were arrested declaring "Independence from Nuclear Terrorism."  A court date for dozens of these is expected in May at the federal courthouse in Knoxville. 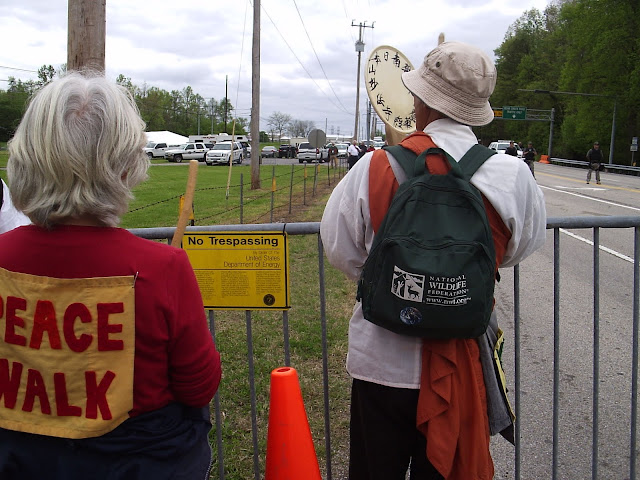 "U.S. law and international law as U.S. law prohibit threatening or inflicting indiscriminate harm and unnecessary suffering, in any circumstance in war or peace.  Because all nuclear weapons “cannot be contained in space or time,” any use would, ipso facto, constitute a crime against humanity and a war crime including those prepared for use at Y-12."
International Law, Y-12 & Civil Resistance