Trainers, organizers, and facilitators of Nonviolent Direct Action gathered in Asheville, N.C. over the May Day weekend for peer-to-peer exchange, campaign storytelling, tactics and skills swap among Southeast organizers, along with strategical discussions of how to work together more effectively across issues and campaigns in the South.

Issues that surfaced at the ACTION South Nonviolent Direct Action Trainer’s Gathering were as immediate as Asheville’s Defensa Communitaria police checkpoint vigil campaign in solidarity with Hispanic immigrants, and as far reaching as FBI raids targeting anti-war activists and persons acting to build international relationships. Dissidents caught up in this modern-day Cointelpro State repression are challenging Grand Jury indictments and nonviolent direct action is a tool of the struggle.


Friday night’s meet and greet in the historic Battery Park Hotel rooftop garden included a bird’s- eye view of the “Land of the Sky” and a  sunset view of Asheville’s surrounding mountains. As part of the city-wide YWCA Stand Against Racism events, the Friday discussion centered on the principles and application of nonviolent direct action as used during the historic civil rights struggle. Participants shared personal experiences confronting racism and other persistent injustice using tools of organized nonviolence.

Steve Norris, a professor of Peace Studies and Environmental Justice at Warren Wilson College in Swannanoa, N.C., led the discussion.


In1961 Oralene, a native of Mars Hill, NC, went on to become the first person of African-American heritage admitted to Mars Hill College.  Her story is especially poignant. Her great grandfather Joseph Anderson— a slave who laid the bricks that built the college—was seized by contractors as collateral for a debt on the Mars Hill College building and jailed until the debt was paid. His family is now celebrated along with other founding members of the Baptist College.

Discussion continued Saturday at Asheville’s Unitarian Universalist Church with panel presentations as varied as Emily Rhyne of Asheville's Defensa Comunitaria,  and Red Moon Song of Earth Haven Eco Village, who spoke of her lifelong practice of “radical simplicity” and “fierce peace,” in her work to end militarism and war. Other panelists included long-time war tax resister Steve Magin, of Madison County, N.C. and Joe Rhinehart, of Asheville’s worker-owned Firestorm Café and Books, who focused on connecting cooperatives with social movements.

Sarah Buchner of UNC-A's SDS gave an update on local efforts in support of FBI-targeted peace activists, and Patrick O'Neill, a cofounder of the Father Charlie Mulholland Catholic Worker House in Garner, N.C., told of the recent creative action where he dressed as an ICE officer and arrested Lady Liberty to demonstrate concerns for immigrant rights. Patrick’s activist daughters Bernadette and Moira also attended, adding greatly to the richness of the day as they conveyed their experiences as outspoken college and high school students immersed in traditional educational settings.


War Crimes Times! Editor Kim Carlyle shared some VFP experiences in “taking back” the media and the Veterans' creative methods at the Newsuem to distribute copies of the quarterly newspaper.

Facilitators included Mary Olsen, regional coordinator of Nuclear Information and Resource Service, and Betsy Crites, Director of N.C. Peace Action, along with Coleman Smith and Clare Hanrahan of the New South Network of War Resisters.  In addition of facilitation help, RedMoonSong and Jim Stockwell headed up the kitchen crew that provided the delicious vegetarian fare.

The event was deepened with the participation of numerous elders, including feminist scholar and Asheville native Antigua George, and Brad Lyttle of Chicago, both sharing experiences in direct action going back more than half a century. Lyttle, who was arrested for civil resistance at the Y-12 plant in July 2010, made a last minute detour to be at the ACTION South Gathering prior to his federal trial in Knoxville, Tenn.

Sunday participants gathered at Firestorm Café’ and Books after being fortified and inspired there the night before by the May Day Chorus and a rousing round of  labor movement songs and stories from the coalfields.

We spent much of our time Sunday going over some of Gene Sharp’s 198 methods of nonviolent action. The group moved through the list, commenting on their familiarity with and the relevance of the nonviolent methods.  The list provided the framework for hours of good discussion as participants offered personal accounts of how they have seen and participated in these methods in action.

Local organizer, David Clover, with the Asheville Freeskool, said Sunday’s discussion “exceeded my expectations.”  We all agreed that we wanted further opportunities to engage in-depth discussions with more diverse participants. The discussion was videotaped by Kasha Baxter, a producer with VFP-TV and Ellen Thomas, of  the anti-nuclear effort, Proposition One.

"Many thanks for your extraordinary organizing and leadership!” said John Heuer board member of NC Peace Action and member of the Eisenhower Chapter of the VFP, ‘Thanks for all your hard work organizing this event.”

At the close of the Trainers' Gathering, many participants joined Defensa Communitaria activists and allies to participate with “Mothers Against Family Separation," a public demonstration against the deportations of immigrants in Western North Carolina.

Collaboration, we all agreed, is vital to the success of our movements, and organizers plan to gather again soon to review the weekend with the aim of making the next gathering of S.E. regional trainers' even more dynamic and inclusive. 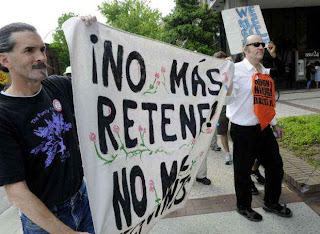 "I found my time well spent and rewarding. I met good people and made good connections. The venues worked well, the food was great, and the sessions were well-facilitated. There is much more to be done, but this is a great step forward." Kim Carlyle, VFP 099

"Come you discontented ones and give a helping hand..."

Report by Clare Hanrahan & Coleman Smith
Support for the gathering came from a grant of redirected war taxes from the Nonviolent Action Community of Cascadia, with additional support from local activists, allies, and donors,  including our dear friends Judith,  Antigua , &  Monica. Special appreciation to  NC Peace Action for encouragement and participation. Passing the hat for sliding-scale donations was critical, as were the  hundreds of hours of in-kind contributions from organizers and supporters. Thanks to everyone!

Posted by New South Network of War Resisters at 6:11 PM