Under a Blue Sky in Tennessee 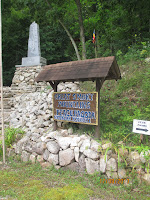 We followed the back roads from the great Appalachian Mountains to the Mighty Mississippi, this Fall with presentations in Knoxville, Nashville and Memphis, Tennessee, finding hospitality along the way with friends and family.


In August, New South Network activists Clare Hanrahan and Redmoonsong visited with Bro. Utsumi & Sr. Denise of the Nipponzon Myohoji Buddhist Order at the Great Smoky Mountains Peace Pagoda near Newport, Tennessee.  Work is underway with dedicated volunteers and, when completed, the Peace Pagoda will be visible from miles around, including to those traveling through East Tennessee on Interstate 40. Bro. Utsumi & Sr. Denise will be leading their 11th annual peace walk to Fort Benning and the SOA Watch vigil November 16th through 24th.

In September Coleman and Clare were up around Johnson City, in the Eastern mountains of Tennessee for an activist picnic with Everyone Acting Together in Solidarity. EATS is an outgrowth of the Tri Cities Occupy Movement and is doing great work on issues of social justice, environmental activism and community building.


In October at the Appalachian Public Interest and Environmental Law Conference in Knoxville we joined with several hundred eco-minded and socially conscious activists, attorneys, students and scientists working to achieve environmental and social justice throughout Appalachia and surrounding areas.

Keynote speaker Tom Butler of the Foundation for Deep Ecology, editor of Energy: Overdevelopment and the Delusion of Endless Growth made a compelling presentation as a voice for the inherent rights of wild nature, challenging the view of the natural world as "commodity."
While there we connected and reconnected with folks working on many fronts for environmental and social justice, including Ken Edwards, Brethren Pastor and member of the Appalachian Peace Education Center and Aerojet Action Project. We met with Ken in Jonesboro, Tenn. in August when he hosted the Christian Peacemaker Teams in town to raise awareness of the environmental and human rights impacts of  Aerojet/Rockedyne, a Jonesboro based plant manufacturing "depleted" uranium weapons and polluting the soil and water with uranium.

The climate for environmental activism in Tennessee has its challenges.  In June 2013 Huffington Post reported on the chilling remarks of the deputy director of the Tennessee Department of Environment and Conservation's (TDEC) Division Of Water Resources who warned a public assembly: "...you need to make sure that when you make water quality complaints you have a basis, because federally, if there's no water quality issues, that can be considered under Homeland Security an act of terrorism."  Nothing new there. The Green Scare rears its head everywhere people speak and act on behalf of the Earth.

In Oak Ridge, Tenn. we joined with friends from Oak Ridge Environmental Peace Alliance at their long-standing Sunday vigil at the gates of the U.S. Department of Energy (DOE)nuclear bomb plant. The 35,000 acre site contains hundreds contaminated areas and contaminated surface water and sediment outside the boundary fence,  including the Poplar Creek, the Clinch River, and lower Watts Bar Reservoir of the Tennessee River. From EPA Superfund info. We appreciated the overnight hospitality of Eric & Libby Johnson in Maryville. 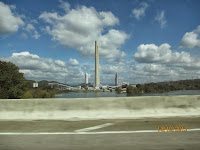 On the way to Nashville we passed by the Tennessee Valley Authority (TVA) Kingston Fossil Plant in Harriman. On December 22, 2008, a failure of the  dike used to contain fly ash spilled over one billion gallons of fly ash sludge into Watts Barr Lake and the Emory River. The environmental catastrophe was 100 times larger than the Exxon Valdez spill in Alaska, which released 10.9 million gallons of crude oil.

In Nashville we were hosted by the Nashville Peace Coalition to present our PowerPoint:  Environmental Impact: Atomic Appalachia & the Militarized SouthEast.We appreciated the warm welcome at the Nashville Friends Meeting and the overnight hospitality at Nashville Greenlands, a Catholic Worker Urban Agriculture community, home to legendary war tax resister Karl Meyer. 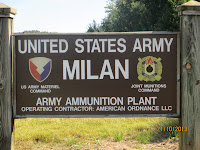 Traveling West we detoured to Milan, Tennessee, and the WWII era Army Ammunition Plant. The 22,540-acre site is on the EPA Superfund list of most contaminated sites. It has a ground water contamination plume that continues to spread. The once thriving ammunition plant is now a desolate-looking wasteland.  Primary include 2,4,6-trinitrotoluene (TNT) and RDX, also known as cyclonite.

We were in Memphis for the 10th Annual Gandhi-King conference organized by our long time friends at the Mid South Peace & Justice Center. The Keynote speakers were two powerful voices for justice:  Medea Benjamin of Code Pink, speaking on the dangerous use of weaponized  Drones, and Attorney Jeribu Hill, orator and organizer extraordinaire of the Mississippi Workers Center, fighting for the human rights of low-wage workers. Both women spoke with compelling urgency and a call to action.


Memphis is Clare's hometown, and while there we visited the Viet Nam Veterans memorial in Overton Park, taking action to add the names of her two brothers, Dan & Tom, and remembrance of all the victims of PTSD, Agent Orange and Suicide whose names have yet to be etched on the war memorials.  Clare has joined the VFP working group on an alternative/accurate/counter commemoration of the American war in Viet Nam.

We took time out to spend an evening on Beale Street with VFP's Elliott Adams and enjoyed warm Memphis hospitality with Clare's brother Robert and family.

Back home in Asheville, we took the bus to Charlotte, North Carolina to testify before the Nuclear Regulatory Commission to emphatically say:  "No More Nukes: We have no confidence in the NRC to safely manage 70,000 tons of existing nuclear waste. Don't make any more! There is no safe level of radiation.

We're back on the road in November where Clare will be presenting our Powerpoint on Atomic Appalachia and Militarism's environmental impact in the South at the Drone Summit and Coleman will be in Columbus, Ga. at work with the Puppetista Collective for the SOA Watch vigil at the gates of Fort Benning.  In December we've been asked to present at the U.S. Human Rights Forum in Atlanta.  Stay tuned for reports.

Thanks to the ongoing support of our local friends for helping to keep us on the road.  Your support is welcome and much needed to keep us on the ground weaving connections in the Southeast. We especially need help to get to Fort Benning for the annual SOA Watch vigil at the gates.


Folks I've just been down, down to Memphis town,
That's where the people smile, smile on you all the while.
Hospitality, they were good to me.
I couldn't spend a dime, and had the grandest time.


Posted by New South Network of War Resisters at 4:54 PM