Thirty four activists working for a nuclear-free world boarded the bus in the pre-dawn hours January 7th in Asheville, North Carolina,  for the journey through the mountains to Augusta, Georgia. We were encouraged to attend by Mary Olsen, director of the S.E. office of the Nuclear Information Resource Services.  We arrived prepared to speak our minds at the only public hearing in the Southeast of President Obama's Blue Ribbon Commission on America's Nuclear Future.

At issue is the disposition of tons of  U.S. generated highly radioactive waste. The Commission is charged with making recommendations to the President.  The day-long event was held in the plush ballroom of the Marriott Hotel on the banks of the Savannah River. Much of the day was taken up by prepared comments from stakeholders in the dangerous, dirty and expensive nuclear industry. The advocates for the so-called Savannah River Energy Park included academics seeking to educate the next generation of nuclear workers;  politicians and members of the Chambers of Commerce talking about the economic benefits to distressed communities; industry workers and businesses seeking to build an energy park at the complex that could include four experimental nuclear power plants capable of burning radioactive waste for fuel,  and even a retired Naval officer who commanded the fleet of nuclear submarines.

The theme of this "Energy park" is the money to be made in the reprocessing of 67,000 metric tons of highly radioactive waste, now in storage at nuclear power plants throughout the United States. The Savannah River Site has been wasted for decades, and is now one of the most contaminated areas in the country. And they want to bring in more, for reprocessing.  But only, they cautioned the Commission, if there is somewhere else to send it back to, now that Yucca Mountain is off the table as a permanent repository.
Folks in Western North Carolina know the dangers of travel in these mountains. We will not allow our homeplace to become a Nuclear Crossroads for highly radioactive waste shipments along I-26 and I-40 enroute to the Savannah River Site in South Carolina. It is an insane proposal.  And we certainly do not want to have our beautiful mountains re-considered for any long term storage of nuclear waste that would be processed in South Carolina.
So we came to speak our minds.  The video clip below is one of many  filmed by  Ellen Thomas, a thirty-year veteran in the work for a nuclear-free future.  Two Minute Commentaries. 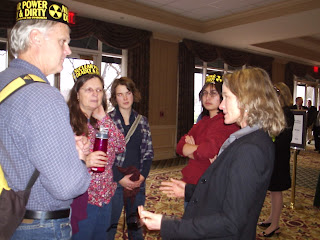 So many stood to speak  that the Commission had to extend the allotted one hour public comment time so everyone who wished to speak had a two-minute opportunity.  And we spoke with clarity, wisdom, and informed passion.  And we encouraged one another and strengthened the bonds of respect and affection that is the fruit of our collaborative efforts. Bonds of solidarity that we will need as we work together to turn back this nuclear madness.
Posted by New South Network of War Resisters at 10:36 PM