#2 of 198 Methods of Nonviolent Direct Action 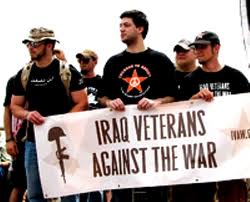 "...I am writing you today, not asking for forgiveness for what I decided to do, but to give you an idea of what brought me to that decision to leave the Army and speak out against the Occupation...." James Circello, Iraq Veterans Against The War

Read More: Open Letter to the Government from an AWOL Soldier