#5 of 198 Methods of Nonviolent Direct Action

NONVIOLENT PROTEST AND PERSUASION
Formal Statements
#5. Declarations of Indictment and Intention
Click above for a general explanation of #5  from blogger Michael Olschimke

Since its earliest use in the U.S. Constitution indicting King George III for his  "repeated injuries and usurpations" of the Americans' rights and liberties," various groups have made Declarations of  indictment seeking accountability for the crimes of government.  In recent years, Declarations of Indictment have been drafted against George W. Bush and his administration by former US Attorney General Ramsey Clark and by The Center for Constitutional Rights,
and other International groups. 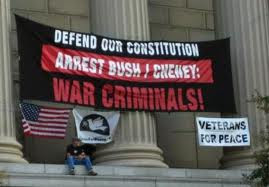 The US Court of Appeals ruled on Aug. 9, 2011,  that two U.S. citizens who worked for a private security firm in Iraq can proceed to take Donald Rumsfeld to trial for the torture they assert they endured during months of imprisonment in 2006 in a prison set up by the Pentagon at a military base near Baghdad's airport.
Read report here on Indict BushNow.org