#10 of 198 Methods of Nonviolent Direct Action

Communications with a Wider Audience
#10. Newspapers and journals 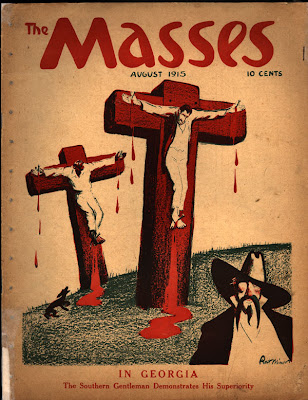 The Masses"...A revolutionary and not a reform magazine: a magazine with a sense of humour and no respect for the respectable: frank, arrogant, impertinent, searching for true causes: a magazine directed against rigidity and dogma wherever it is found: printing what is too naked or true for a money-making press: a magazine whose final policy is to do as it pleases and conciliate nobody, not even its readers." - Max Eastman

The August 1915 cover of The Masses is particularly relevant today with the execution of Troy Davis by the state of Georgia, despite more than reasonable doubt as to his guilt.

In July 1913, The Masses published Art Young's cartoon 'Poisoned at the Source,' which depicted the Associated Press' president, Frank B. Noyes, poisoning a well labeled 'The News' with lies, suppressed facts, slander, and prejudice. The cartoon was a response to the lack of national news coverage on the Paint Creek-Cabin Creek strike of 1912 in Kanawha County, West Virginia. The strike had lasted more than a year, and was characterized by deadly clashes between miners and militia hired by the coal companies.The coal wars continue today with mountaintop removal coal mining and the

The Masses was followed by The Liberator that published from 1918 - 1924.
Here is excerpt from Helen Keller's article in the first issue:

" Down through the long, weary years the will of the ruling class has been to suppress either the man or his message when they antagonized its interests. From the execution of the propagandist and the burning of books, down through the various degrees of censorship and expurgation to the highly civilized legal indictment and winking at mob crime by constituted authorities, the cry has ever been “crucify him!” The ideas and activities of minorities are misunderstood and misrepresented. It is easier to condemn than to investigate. It takes courage to steer one’s course through a storm of abuse and ignominy. But I believe that discussion of even the most bitterly controverted matters is demanded by our love of justice, by our sense of fairness and an honest desire to understand the problems that are rending society."  read more
Posted by New South Network of War Resisters at 2:02 PM