From A Georgia Jail to a Tennessee Courtroom: One Truthteller's Story 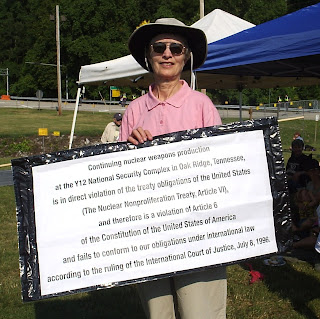 Catholic sister Mary Dennis Lentsch is persistent and unrepentant in her resistance to the crime of nuclear weapons production at the Y-12 Nuclear Weapons Complex in Oak Ridge, Tenn.

She stood before judge Bruce Guyton in Federal court . on September 21 to be sentenced for her nonviolent civil resistance at the Y12 bomb plant in July of 2010. According to Ralph Hutchinson of the Oak Ridge Environmental Peace Alliance, the courtroom was full of supporters as Mary Dennis was brought in in shackles; she had been in custody since mid-June in a private jail in Ocilla, Georgia. She was surprised to hear the Judge's sentence of "Time Served," after enduring nearly four months in jail  for peacefully stepping through a three-strand barbed wire fence and joining a circle of 12 others  in a prayer for an end to nuclear weapons.
At her sentencing, over one year later, she stood in shackles as she addressed the courtroom:

“...I bow to the sacred in everyone. I bow to the sacred in the plants and animals. I bow to the sacred in all creation....In order to protect all the sacred gifts of creation, I feel called to do whatever is necessary to abolish nuclear weapons."
From a letter to friends, September 28, 2011:
My travel from the Ocilla jail [in Georgia] to Knoxville for the sentencing was quite an experience.   On September 20, at 12:30 am I was told to pack up for transport.   It took me about 20 minutes to pack and then I waited until 2:30 until they came to get me from my cell and take me down for the exit processing.   During the processing we were given a bag lunch breakfast and finally at 4:30 we were loaded into the van.    Doris and I were the only women and there were 7 men.  I had heard stories that there were no bathroom stops during the 7 hour drive so I had curtailed my liquid intake.  It was true there were no bathroom stops.   I had also heard that it was freezing and wore two long sleeve thermal shirts—this was also true.   I was skeptical when I heard they drove 80-90 miles per hour.   Well, I sat right behind the driver and kept looking over his shoulder and sure enough this was true.    I could not believe when we maintained this speed in a construction zone that said 55-60.   I’m hoping this is a “once in a lifetime” trip for me.
Of course, we were completely shackled for this trip.
When we arrived in Knoxville Doris and I were placed in a federal holding cell in the Federal Court House.  The Ocilla chains were removed and we put on the court house chains and sat in freezing temperature from 11:00 am-3:00 pm.    Then they came and transported us to the Knox County Jail where they removed the court house chains and put on the KCJ chains.  Then we were transported in a paddy wagon to the Knox County Penal Farm where we would be booked.
We arrived at the Penal Farm at 4:15 pm and sat, chained, in a variety of holding pens until our processing was completed at 3:30 am.   I was in my cell and slept from 3:30 am to 6:30 am when
I was awaked to eat my sack lunch breakfast.     Eventually a guard came to me and said, “The U.S. Marshals couldn’t find you.   It is late now so a special car will rush you to court.”    Again,
chains needed to be put on.   I was relieved to arrive at the court room about 5 minutes before the  9:30 court session...
Mary Dennis Lentsch
1936 Liberty Hill Road     Washburn  TN  37888
865-497-3982          dennispbvm@aol.com
We Must Abolish Nuclear Weapons!!
To learn about the other 12 who served and are still serving jail time, click here.
Posted by New South Network of War Resisters at 10:36 AM