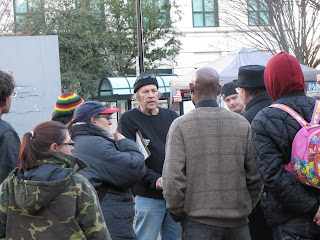 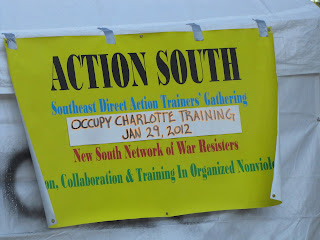 With more than 100 supporters present chanting and singing, the police destroyed approxiatmately 35 tents as they were tossed into waiting city garbage trucks.

After referrals and encouragement from Mandy Carter , former Southeast Director for the War Resisters League and currently working with SONG, as well as NC Peace Action Board Chair, John Heuer, Coleman Smith contacted the Charlotte group to assist with final prepartions for two Direct Action Trainings. Smith, also a member of Occupy Asheville Nonviolent Direct Action Trainers Group, confirmed participation of Butch Turk, a Ruckus Society trainer and medical professional living in Hendersonville, NC, who provided blockade and physical training Friday on how to use your body and protect yourself and others during an action.

Coleman arrived Saturday to meet and 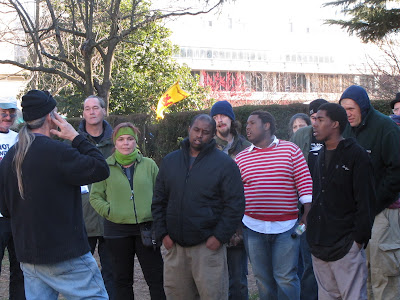 talk with Charlotte occupiers, listening to
local participants to understand their
experience and expectations for a direct
action. He crafted a 3 1/2 hour training in
Nonviolence for Sunday to help clarify
and focus the potential arrestees and their support people.

After the action and arrests on January 30 of the "Queen City Seven," Smith and others took on Jail Support roles until all arrested were released without bail on their personal promise to show up in court.  Police returned to the site again on January 31 for further arrests.

Laurel Green, who helped coordinate the support people for the Occupy Charlotte action, remarked that the trainings provided by the New South Network helped to bring focus to the action and confidence to participants.

Posted by New South Network of War Resisters at 7:01 PM