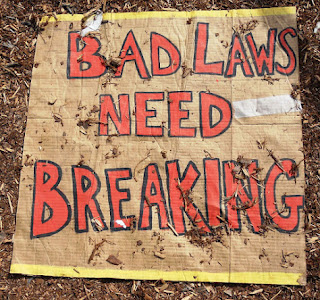 The ordinances went into effect on Friday, Feb. 17. They permit 24-hr protest, in certain designated areas, but no public camping.

The next court date for Occupy Asheville is February 23. On docket are as many as 30 defendants arrested for participation in several Direct Action events throughout the city.  A half dozen activists were picked up on the street days after a Nov. 2. march and rally. Arrest warrants issued after police reviewed surveillance video. This writer is also facing court on three misdemeanor charges after serving as a National Lawyers Guild Legal Observer during an Occupy Asheville march and rally on Nov. 2., and was unjustly arrested at a subsequent rally several days later while also serving as a Legal Observer.

Asheville native and VFP member John Penley returned from the Occupy  in Zucotti park to join with the Occupy Asheville encampment in front of City Hall.  He set up his tent on the plaza in front of City Hall as a form of symbolic free speech to test the newly enacted ordinances. Penley and two others from the encampment, traveling occupiers Perry Thompson Graham, 23, of Eugene, Oregon and Matthew Ryan Dannevik, 26, of Scribener, NE, were released after processing in the Buncombe County Jail.

The Occupy the Roads travel van arrived at the encampment as a show of support for Occupy Asheville, adding strength to the gathering at City Hall.

Thanks to VFP member and Legal Observer Jim Brown for these and other photos of the break-down of the Occupy Asheville encampment. City Hall Camp's over. Occupy is not!!!

Posted by New South Network of War Resisters at 8:43 AM