NATO Chicago: "Let Them March All They Want..."

"Let them march all they want, just so long as they pay their taxes."
U.S. Sec. of State Alexander Haig, 1982.

It was a telling detour when we New South Network field organizers missed our exit off the I-90 Skyway to emerge in the economically oppressed and under served Chicago South Side, rather than our Hyde Park meeting destination. This unplanned drive through the disenfranchised side of Chicago underscored how important it is in our work to not overlook class and race. More and more we see increasing numbers of people who must struggle daily to maintain themselves, while the war-waging, capitalist elite, profit obscenely from what seems to be an endless War on Earth through a culture of violence, exploitation and domination.

New South Network friend and supporter Ellen Thomas, of Proposition One and an original occupier in front of the White House for nearly two decades, loaned us her car for the journey from Asheville to Chicago, and war tax resister and  organizing colleague Redmoonsong helped out with funds for the long journey.  We participated in the twice yearly gathering of the National War Tax Resistance Coordinating Committee (NWTRCC)  and the rally, march, and protest against the NATO Summit.   NWTRCC is a coalition of groups and individuals from across the United States, formed in 1982 to provide information and support to people involved in or considering some form of war tax resistance.   At our twice annual meetings we strategize about ways and means of refusing to pay for war, building and sustaining community and providing mutual support.

Clare Hanrahan rotated off the NWTRCC Administrative Committee as Carlos Steward, recently released from federal prison for his conscientious objection to paying for war,  was accepted for a two year term.  Carlos did final editing on the NWTRCC film Death and Taxes, with interviews of war tax resisters from across the US, showing their varied lifestyles and challenges as conscientious objectors to paying for war.... "If you work against war, why are you paying for it?"

NWTRCC's May 2013 meeting will be held in Asheville, N. C.  We are looking for a site to celebrate NWTRCC’s 30th anniversary this November.  One of the most dynamic, supportive aspects of our meetings is hearing the stories and reports about local resistance work happening around the country, and re-connecting with one another.
A current project is the Rapid Outreach Working Group (ROWG), organized to quickly respond to requests for information, speakers, and materials on war tax resistance as new situations arise. You can contact ROWG through Action South for more details.

Given that NATO is, for the most part, an International Military Intervention Force  under the command of the United States, it was doubly appropriate to meet in consultation with war tax resisters from across the country, while some of the world's worse offending war mongers gathered nearby. With security for the NATO Summit on high alert, major highways were shut down, traffic was detoured in and around a large part of central Chicago, which had been converted into a militarized zone, cordoned off, with check points and a massive police presence, helicopters and fighter jets patrolling over head, and rumored inflatable Zodiac boats, mounted with machine guns, keeping an eye on the Lake Michigan approach to the Exposition Center - ground zero for the NATO dignitaries.

Along the way we stayed with our friends Jim Scheff and Tina Marie Johnson who coordinate and direct the forest protection network Kentucky Heartwood. They opened their beautifully crafted home in Berea, Kentucky to us for an overnight respite and fed us well at the family table  as we compared how the work we each do supports and sustains the just world we seek. We work to end the death and destruction of our planetary systems by violent conflict; and they to assure that what is left of the natural world is thriving and whole, and continues to lift and regenerate us all. We were in a moment of realization that the anti-militarism/peace and justice movement has a direct connection to the environmental justice movement and in fact are part of an even larger need to end ruthless exploitations of all human, plant, animal, and natural resources on Earth.

For our weekend of radical organizing and protest in Chicago, we enjoyed the hospitality of our 84 year old friend and colleague,  Brad Lyttle, long time peace activist and icon of the movement.  In 2011 Brad was with us in Asheville for our gathering of Southeast Nonviolent Direct Action trainers.  Brad has lived in what was his parent's home since 1942. With one sailboat docked in his small front yard and two more behind the house amid miscellaneous materials and artifacts, you might say that Brad is not your typical Hyde Park resident - but more on our generous host and intrepid peace warrior in our next Action South post.

As we weaved our way through street construction, detours and primarily black neighborhoods, looking for Brad's house, the dramatic transition out of the South
Side, continued through what can only be described as a  physical, socioeconomic,  and cultural demarcation - formed by solid urban infield, a hospital district, blending with the University of Chicago/Hyde Park area, multi-cultural, well educated and privileged with its well manicured lawns, public landscapes, beautiful homes and structures. Brad recalled a description of the Hyde Park district by a Chicago journalist as “...black and white, standing shoulder to shoulder, against the lower class.”

On Friday evening, our merry band of war tax resisters traveled to the Wellington Avenue United Church of Christ which served as a welcome center for protesters. Author and activist  David Swanson spoke on the Military Industrial Complex.  He was introduced by Kathy Kelly of Voices for Creative Nonviolence, who two days later was on her way on another peace mission to Kabul, Afghanistan. 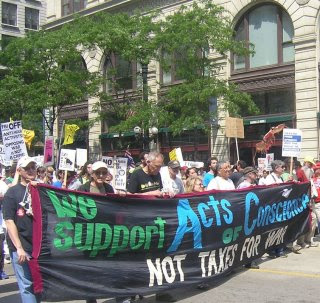 On Saturday we stood for two hours in Grant Park with our banners while we distributed hundreds of pieces of  informational literature on war tax resistance. We fit seamlessly into what was the perfect spot to catch the eyes and ears of the thousands of people gathering to march against NATO's and the United States' prosecution of war for profit and military hegemony of our planet.

We fielded press interviews for TV, radio, and print media.  There seemed to be people from all over the world, with colorful signs, banners, and powerful messages declaring that we will not accept a doctrine of war for our lives and the future.

An estimated 6-7,000 people marched through downtown Chicago for another two hot hours amid a massive police presence which itself was in the thousands.

As the peaceful demonstration approached McCormick Place near where world leaders were meeting, we were being corralled into an area of chain link fencing surrounded by fully armored tactical police on foot and horses while  helicopters hovered above.  Dozens of Iraq Veterans Against the War, protected by a ring of Veterans for Peace, demonstrated their disgust with the war and how they have been betrayed by the Pentagon and its "global war on terror," by hurling their medals over the fence at the building were the world leaders met.

As our group was making its way out of the area, through dense layers of even more police squadrons, ready for action,we heard our friend and IVAW member Jason Hurd declare to the assembly through a microphone,  how deeply sorry he was for the destruction of the war.  Jason had just visited Asheville with Operation Recovery, and IVAW campaign for GI and Veterans' Right to Heal. Their courage to confront the military hegemony of the US and it's NATO pawn must spring from their basic warrior's training to face and defeat an enemy. One is left with the obvious question of,  "Who is the real enemy?"    --coleman smith

Posted by New South Network of War Resisters at 2:52 PM