"Dignity is Standing Here. No Papers. No Fear"

Scores of Asheville supporters gathered to welcome the No Papers No Fear Ride for Justice and its courageous crew when the “UndocuBus” stopped here on August 30th.

The national delegation of undocumented people and their allies left Phoenix, Arizona on July 29th, the anniversary of the state’s implementation of SB1070, for a cross-country ride to rally the migrant community to overcome fear and organize to challenge anti-immigrant policies.

We shared a meal and conversations at the  WNC CHS fellowship hall  in West Asheville provided by Rosetta’s kitchen, and served by members of the UnitarianUniversalist church of Asheville, where the caravan’s weary travelers found overnight rest.

Travelers shared stories of their circumstances and experiences and told why they dared to “come out of the shadows” and stand up for immigrant justice.  Simultaneous translations were provided so that all could speak “in the language they live and dream in,” so their courageous stories could be heard with the power of their native tongue. 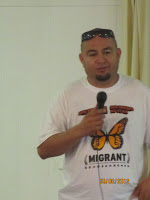 The emblem of the migratory Monarch butterfly brightened the shirts they wore and the banners they carried all along the journey, and in the  march through the streets of Charlotte. The banner also provided a place to sit down in the streets of the "Queen City" to call for human rights and dignity.

Asheville folks were present to witness the bold and inspiring action on September 2, when  immigrants sat down in the pouring rain in the streets outside the convention hall where the DNC convened. They chanted  "No Papers. No Fear," holding high the placards reading "Undocumented."

Due to the public and community support they have garnered, and their organizational skill and solidarity, all were released without being placed in deportation proceedings, though the risk was real.

They are determined, disciplined and dedicated in their actions to challenge the unjust immigration policies of the U.S. government and were successful in bringing their story to the middle of the immigration debate at the Democratic National Convention.

The stop in Asheville was coordinated through various immigrant advocacy and action groups including Defensa Communitaria and Nuestro Centro.

Over the last six years, immigrants and advocates in Western North Carolina have been organizing against racial profiling, deportations, and the use of
police check points targeting Latinos and undocumented immigrants.

In November 2011, Immigration and Customs Enforcement (ICE) conducted a work place raid at the Shogun restaurant. Twelve workers  have been placed in deportation proceedings following the raid and efforts are underway to reverse that decision.

The No Papers No Fear ride was inspired by actions of undocumented students, such as coming out of the shadows events and civil disobedience actions, that have demonstrated the power and results of communities acting and speaking for themselves.