The Queen City: Locking Down for Democracy


﻿
An alarming number of armed forces have converged in Charlotte.  They are occupying the downtown streets and buildings, lurking in doorways, riding along on trains and buses, and sitting loaded and ready on the back of fire trucks parked along side streets in an astounding display of coercive power. 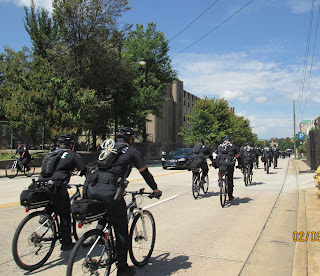 Young men are stationed here and there and everywhere with their “Secret Service” designation ironically embroidered on shirts or jackets, while state, local and municipal police from throughout the region, many on foot in tight squadrons, parade along the sidewalks, hover in the wide entrances to parking garages, race through on bicycles, stand ready on horses, maneuver through the streets on motorcycles or inside squad cars and other wheeled conveyances.  A variety of private security personnel stand guard outside banks and other corporate buildings or in front of fenced off courtyard entrances to hotels.
Camouflage-clad soldiers with automatic rifles slung over their shoulder stand at guard stations outside police outposts, or patrol residential neighborhoods providing armed backup for the already heavily armed police. As one remarked, “All I'm suppoised to do is stand here and not go to sleep."
﻿An array of credentials swing from lanyards around the necks of passers by, each granting access to various insider events. The streets outside the convention center are crowded with delegates, protesters and tourists from around the world moving among local residents and workers. News teams lug cameras and microphones  along the sidewalks passing beneath the neon lights and corporate towers of the Queen City.

Periodic downpours drench the crowds as traffic officers with shiny brass whistles attempt to keep the flow going. Buses of delegates unloading  at the convention center, lines of commuters climbing to the train platform, carloads of VIPs are whisked through, and large dogs are deployed to sniff around inside and outside the cars and taxis lined up for entrance into areas restricted to the general traffic.
﻿
﻿
All this show of coercive force is moving among We the People overtly and covertly in this land of the free while delegates gather with little more to do than cheer for the party platform and politicians spew their predictable rhetoric in restricted access arenas.

Stay tuned for eye-witness report of the Sept. 4 bold, brave and inspiring immigrant rights action "No Papers, No Fear!" by folks who traveled through Asheville  on the Undocu Bus.
Posted by New South Network of War Resisters at 12:03 PM